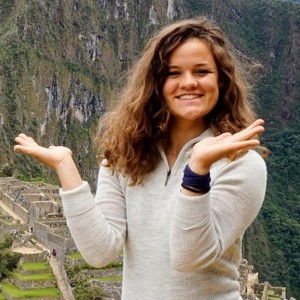 When you are a surfer visiting Peru, surfing in Chicama (or more precisely Puerto Malabrigo) should definitely be on your Peru to-do list. The small surf town is famous for the longest left break of the world! In this Chicama Peru surf guide, we tell you the logistics behind surfing in Chicama on a budget. We tell you how to get to Chicama by public transport from Huanchaco and Trujillo, how to get to Chicama from Lima and how to find the waves once you are there and a lot more.

But first, we start with clarifying a few things about the surf town! Namely, what is the difference between Chicama and Puerto Malabrigo and should you sleep in Chicama or is a day surf trip from Trujillo or Huanchaco a better option for you? Use the menu to get to your subject of interest quickly! 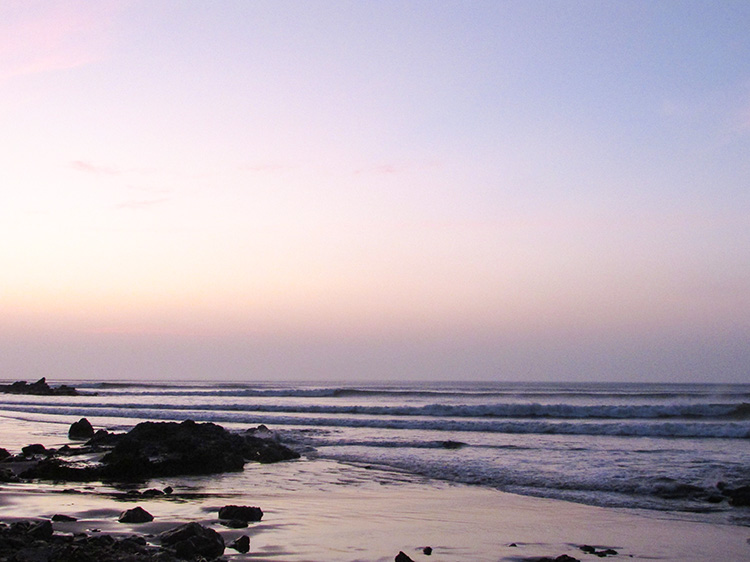 Although Chicama is the name everyone connects to the longest left break of the world, the name of the town where the surfing happens is actually Puerto Malabrigo. “Chicama” town is located a few kilometers away from the coast. Accordingly, it is an important difference when you plan your trip to Chicama by public transport: you need to set Puerto Malabrigo or Puerto Chicama as your destination. For ease of reading, we will just keep using Chicama in the rest of the post of course 😉

One day surf trip or sleeping in Chicama

Although many people think you can only surf Chicama when sleeping in the town itself, Chicama is close enough to Trujillo and surf town Huanchaco to make a day trip to Chicama while sleeping in these places a good option too.

The advantage of doing surf trip for a day is that you get to enjoy the surf at Chicama while sleeping in a town/city that has a little bit more going on… Huanchaco, for instance, has some really nice food options (read more here) and some hostels to have drinks at night. Chicama, on the other hand, really only is about surfing. It is probably for that reason that the offering of hotels, restaurants and surf shops is limited as well. This means that at night you will mainly stay in your hostel and that surf lessons and surfboard rent are hard to find (especially in low season).

Conclusion, only if you are a die-hard surfer with your own board and wetsuit and you want to surf in Chicama multiple days, sleeping in Chicama is a good idea. In this guide to surf Chicama Peru, we will discuss both this option and the day trip option next.

In case you want to sleep in Chicama to get the most out of your surfing adventure, we have a hostel, surf shop, and a cool place to eat in Chicama for you.

we heard good stories about Surf House Chicama. This was also the hostel where we left our items during our day trip and it looked very relaxed and well-taken care off.

ur friend Moritz (thank you mate) found out where to a rent board: Surf Shop la Ola mas larga del Mundo. It was the only open surf shop in town when he visited in the low season.

have a look at Burgers & Brownies Chicama, who sell… Well, burgers and brownies, but more importantly for our vegetable loving readers: they offer other vegetarian options too.

The other option is to make a day trip to surf Chicama from Huanchaco or Trujillo. Many companies will offer you tours to surf the longest wave.  They will ask you around 150 soles (50$), which includes transport, lunch and a boat once in Chicama to bring you to the break (more about the boats later). However, in case you are willing to use public transport to get to Chicama, you can get there for less than $12!

Transport – getting to Chicama

To save yourself a lot of money by doing a DIY trip to Chicama. Coming from Huanchaco there are two steps: the transport from Huanchaco to Terminal Terreste Santa Cruz in Trujillo and then taking the yellow bus from Trujillo to Chicama/Puerto Malabrigo. We describe these below in detail.

As you leave early from Huanchaco, you will want to pack breakfast. Tip, go to a supermarket the day before and buy a picnic there. We went to Flory, near Bily Jungle bar, and bought 10 bread rolls, 2 tomatoes, a cucumber, a package of Edam Cheese and a tin of tuna for 13 soles ($4). The sandwiches that followed were perfect for one person and enough for breakfast and lunch. The only thing you will need is a knife and fork (for the tuna).

When you don’t sleep in Chicama, you will have stuff with you that needs to sit somewhere while you surf. We simply walked into “Surf House Chicama” and asked if we could leave our bags there. Fortunately, this was no problem and we could even have a quick shower after surfing.

TIP: In case you sleep in Huanchaco, these are our favorite places to eat in town! 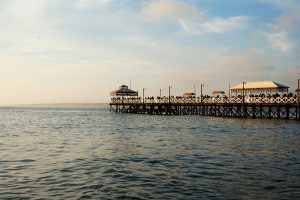 Where to eat in Huanchaco

Where to eat in Huanchaco

Make your way to Terminal Terreste Santa Cruz, where the busses to Chicama and Puerto Malabrigo leave. The bus is Yellow with orange, but if you cannot find it you can just ask around and people will surely help you find it. The bus costs 6 soles, takes around 1,5 hours and leaves frequently. As stated before, your final destination is Puerto Malabrigo, not Chicama town.

You can bring your own surf gear on the bus. Surfboards will be placed in a storage compartment, which costs 5 soles extra. Make sure the fins are facing upwards because the board is just shoved in without a lot of care. Bodyboards are at times put in the same compartment for free, but if you have to pay you can also just bring them with you on the bus.

Transport from Lima to Chicama Peru

Say you come from Lima, you can either get to Trujillo by plane or by bus. The advantage of the bus is of course that you can bring your surfboard with you and it is cheaper, but it is quite a lot more time-consuming as well.

Lima to Trujillo by Bus

There are incredibly many tour companies offering the route Lima Trujillo. For the cheapest busses, you go directly to the terminals. However, if this is a little too risky for you, you can also book online in advance via RedBus.

You will be dropped off at the main bus terminal or the one of your respective bus company in Trujillo, which might not be close to the city center. In that situation, it might be easiest to take a taxi to the terminal with the busses to Chicama or all the way to Chicama itself. You can also take a taxi from there to Huanchaco (max 20 soles).

TIP: When traveling by bus in Peru, make sure to bring your passport. Otherwise, you cannot board.

Lima to Trujillo by plane

Trujillo is reachable by plane as well, namely via Captain FAP Carlos Martínez de Pinillos International Airport, which, we recently found out, is actually in Huanchaco! Ideal, therefore, in case you want to sleep in Huanchaco. In case you want to go to Trujillo (or eventually Chicama), you could search for a bus to the bus terminal Santa Cruz or take a taxi, which should take about 20 minutes.

From 4 am in the morning onwards busses leave from Huanchaco to Trujillo every 5 minutes. The fare is 2 soles. Just make sure you take the H-line bus, as these go to the bus station “ Terminal Terreste Santa Cruz”. Then follow the steps as described above.

You surfed Chicama and it’s time to move on. The bus towards Trujillo leaves at the same spot as where you arrived and same prices apply. Busses for Trujillo leave frequent: we literally had to wait for 3 minutes.

In case you go back to Huanchaco, make sure to depart the bus in Trujillo before you cross Avenue Manische: this is the street where you can catch the buses to Huanchaco.

The section that concludes our surf guide – Chicama Peru: the one about the waves and the actual surfing. Because what’s up with the boats and how do you know you are actually going to see those perfect waves?

When you arrive at Puerto Malabrigo, you will not be immediately impressed by the waves. But do not be fooled by what you see from the boulevard, as it’s behind the rocks where the waves break when the swell is not too strong. In order to find the waves, you have to walk for a while (25 minutes). In all honesty, you do not encounter the picture-perfect Chicama wave every day of the year. Accordingly, I recommend you to read this Chicama spot guide on MagicSeaweed.com. Whereas we focuss more on the practicallities of surfing in Chicama in this Chicma – Peru surf guide, Magic Seaweed gives you all the details you need for in the water. They also do really good condition forecasts, perfect to plan your trip.

Hiring a boat at Chicama

As we experienced, paddling at Chicama is killing. The idea is that you enter the swell at a certain point and then ride along the coast. Paddling back is simply not an option. So, there is the option to use a boat (about 20 dollars a day) that will pick you up every time you surfed the wave and brings you back to the break. You could also simply depart the water at the beach and walk back (15 minutes). Good to know, we actually really liked the walk.

As stated in the section where we discuss whether you should stay in Chicama or Huanchaco, Chicama is a very quiet town. There is a limited number of surf shops and we did not encounter surf schools in low season. It is therefore not a good place to start your surfing career.

Surfing in Chicama is definitely a highlight for surfers visiting Peru. In this Chicama Peru surf guide, we tried to help you with practicalities, where to sleep and how to get to Chicama. We hope it is useful to you 🙂  Might you be going to Mancora next, a lot is being written on that town right now but the food section, important, is already done (read that here). Want to keep on reading? Check out our other surfing and travel articles about Peru! 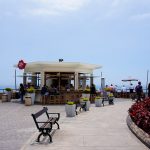 Best places to eat in Miraflores – Lima, on a budget! 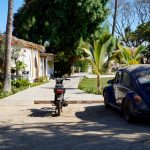 Best things to do in Mancora 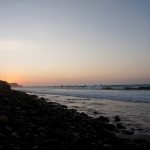 Relax at the most beautiful beaches in Mancora, Peru 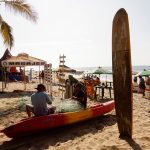 Learn to surf in Mancora, Peru – surf lessons in paradise 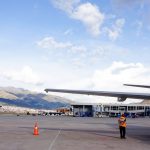 * Your email address will not be published!

Do you have a question or a suggestion or do you want to work with us? Don’t hesitate to contact at info@travelswellspent.com